Launch of the “Sport Together” project

The Irish Football Association (IFA) hosted the online Kick-Off Meeting, in which all partners showed great motivation and a good spirit to work on the joint activities. 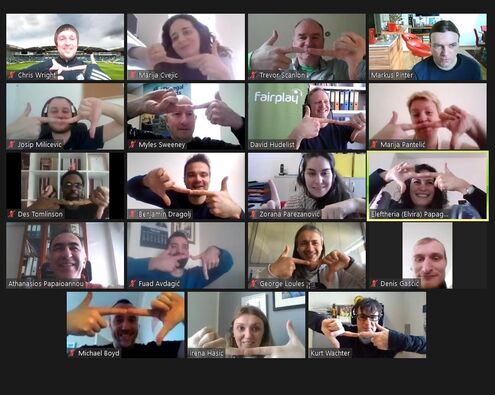 We are proud to announce the official start of our new Erasmus+ project “Sport Together - Strengthening Cross-Community Social Inclusion in Post-Conflict Regions”.

Sport Together was launched via a two-day partner meeting. It was originally scheduled to be hosted by the Irish FA and staged in Belfast, however it was instead held via Zoom due to the ongoing coronavirus pandemic.

Zoom instead of Belfast

Irish FA Chief Executive Patrick Nelson opened the event in which participants were able to engage, discuss and develop the project at its inception.

Irish FA Foundation Community Relations Officer Chris Wright said:
“This project is a truly exciting one and to be able to act as host of the launch was a privilege for the Irish FA Foundation. As disappointed as were to be unable to showcase our stadium, capital city and country to our partners in person, I feel we gave everyone a positive experience of Northern Ireland and the Irish FA through our online delivery. All partners were keen to see our country post pandemic and a study trip for all is very much still in the plans going forward. This is a positive programme with a long-term vision and one I am looking forward to leading on for the foundation.”

The Sport Together project will have a focus on young people and girls and to increase participation of disadvantaged groups - in particular, refugees and newly arrived migrants and minorities - in grassroots sport.

Initially the project will look at ongoing ethno-political divisions in the western Balkan states and on the island of Ireland and then the focus will switch to the continued challenges following the so-called EU refugee crisis.

David Hudelist, Sport Together project co-ordinator with VIDC-fairplay said:
"It was brilliant to see the motivation and spirit of all the partners during the kick-off meeting. We would have liked to have been in Belfast to see the great work the IFA is doing in the areas of social inclusion and diversity but even in that online meeting you could feel the strength of this unique collaboration. To link the Western Balkan region with Northern Ireland and Ireland through football and sport will be an exciting task over the next two and a half years. We are very much looking forward to it.“

Michael Boyd, Irish FA Foundation’s Director of Football Development, said:
“It was exciting to sit in on the launch of such an innovative project. To see so many partners from post conflict countries come together to explore and develop the power of sport was so positive and I know this project will bring so many positives to all partners and communities."

Co-funded by the Erasmus+ Programme of the European Union, with seven partner countries, the project is aiming to tackle threats to social cohesion through training, education, awareness-raising, capacity-building of sport stakeholders and cross-community youth sport. The project area encompasses two European post-conflict areas. First, the Western Balkan Region with the former Yugoslav republics of Bosnia and Herzegovina, Serbia and Croatia. Second, the island of Ireland with Northern Ireland and the Republic of Ireland.