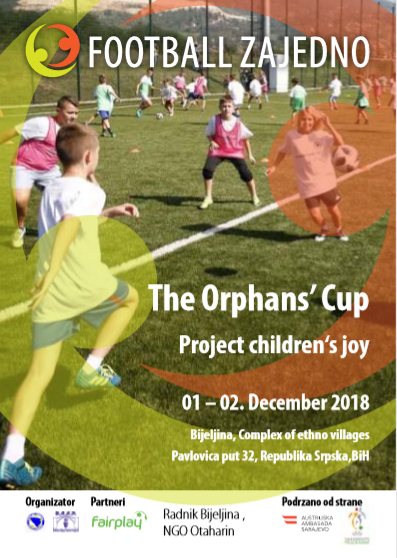 The "The Orphans' Cup" brings together boys and girls from 6 homes for children in Bosnia and Herzegovina. The goal is for all participants to feel pleasure in the game, knowing why football is such a fascinating, wonderful and unrepeatable game. The philosophy behind is that football is open for everyone, regardless of sex, age, ability, national, religious or race affiliation, and that all participants must respect the rules of the game, their teammates, opponents, spectators.

In the two days event next to the football tournament, the priority of the cup will be on education, socializing, exchanging and overcoming prejudices. Girls participating in the game and being an integral part of the team will be a main focus.
In so called fairplay-stations trained workshop-facilitators will offer methods of the Football Zajedno project. The two days project is realised by the Football Association of Bosnia and Herzegovina and BAAP-BiH (Balkan Alpe Adria Project), the main local partner of the Football Zajedno project with support of the Austrian Embassy in Bosnia and Herzegovina.