From 21 to 23 June 2019, a total of 38 teams from 14 countries will play in the final of the Champions Trophy in the Serbian capital Belgrade. 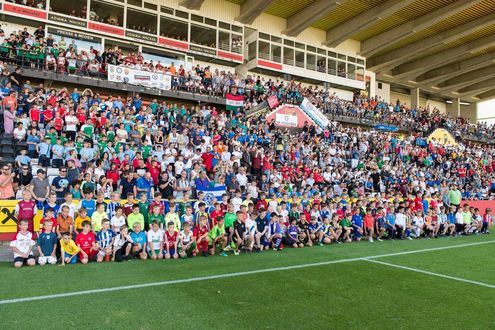 The international youth tournament is organised by the Balkan Alpe Adria Project (BAAP) in cooperation with the Serbian club OFK Belgrade and is part of the Champions Trophy tournaments. Just last weekend (14-16 June 2019) a tournament for U12 teams was held in Vienna's area. In addition to the Serbian top club Red Star Belgrade, among the participating clubs are the best-known AS Roma (Italy), Benfica Lisbon (Portugal), SK Slovan Bratislava (Slovakia), Flyeralarm Admira (Austria) and Olimpija Ljubljana (Slovenia). The tournament will open on Friday evening starting at 5 pm in the stadium of the OFK Belgrade (Mije Kovacevica 10a) with the entry of team captains and introductory speeches by the official representatives of the organisers, the football associations of Serbia and Belgrade and the Austrian Embassy.

Mr. Nikolaus Lutterotti, Austrian Ambassador to the Republic of Serbia, emphasizes the friendly ties between Austria and Serbia and is pleased that a total of eight teams from Austria will come to Belgrade. In his greeting to the participants of the Champions Trophy in Belgrade he writes:

“Worldwide, football connects people across linguistic, social and cultural boundaries. In addition to the numerous games on the lawn should therefore also have time to get to know the participants from other countries and I would be happy if these encounters lasting friendships arise.”

From Austria FAC Vienna, SV Donau Linz, SC Wolkersdorf, SV Wienerberg, Flyeralarm Admira, 1. SSC Simmering, FC 1980 Vienna and SC Parndorf take part. SC Parndorf celebrates its 100th anniversary this year, as well as the FK Jagodina from Serbia. Therefore, they were invited by the organisers to play one of the opening matches. The hosts of OFK Belgrade start against AS Roma.

“The most important things in football are diversity and mutual respect. And we live this at this final tournament of the Champions Trophy this weekend with 38 teams from 14 different countries. On the opening day, there will also be a joint action, with which the participating teams commit themselves to combat racism and nationalism by means of red cards. I would also like to thank the association OFK Belgrade and the Football Association of the City of Belgrade for their cooperation and support.”

“In our joint project ‘Football Zajedno’ we use football as a means of intercultural dialogue and exchange. Already when travelling together by bus, the children get to know each other and can then deepen their contacts during the tournament. Part of our project is to support teams from our partner countries to participate in such international youth tournaments.”

The “Football Zajedno” project will enable eight smaller clubs and football schools from Bosnia-Herzegovina, Montenegro and Serbia to participate in the final tournament of the Champions Trophy.

“Football Zajedno - Promoting Equality and Non-Discrimination through Football” is a joint project of the Football Associations of Bosnia-Herzegovina, Montenegro and Serbia, coordinated by the Austrian fairplay initiative and conducted in cooperation with the Balkan Alpe Adria Project (BAAP). “Football Zajedno” is funded by the UEFA HatTrick Programme and the Austrian Development Agency (ADA).