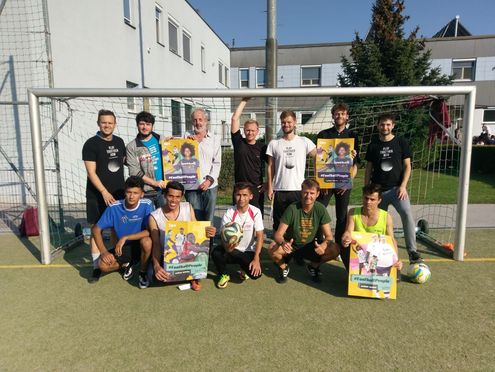 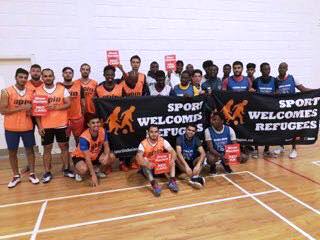 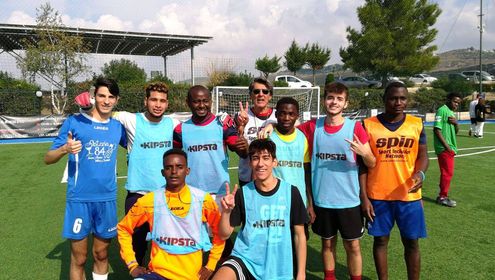 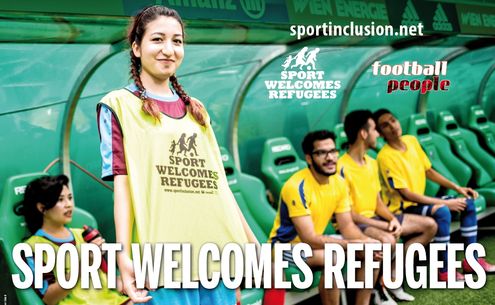 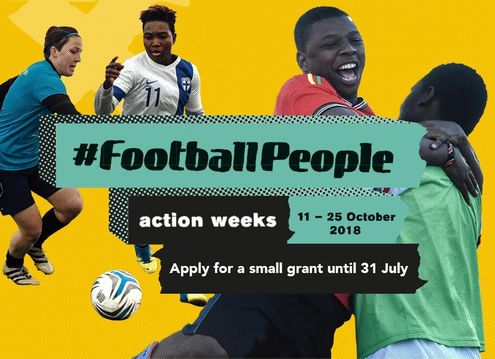 The FHT will use again the match on 26.10. during the FARE Action Weeks to draw attention to the current situation in the Mediterranean. Civil rescue teams such as Mission Lifeline and Seawatch have been doing survival work for years. These non-governmental organisations focus on rescuing refugees who have been taken to sea. European governments have often referred to these organisations as a "taxi service" in the past. This also shows how inhuman and threatened the language of the top decision makers is meanwhile.

The fans will show solidarity with refugees on the stands and collect donations for supporting Seawatch.

PlayTogetherNow was founded as a sports club in 2015. Many refugees have found a second home in the club. PlayTogetherNow means much more than just “playing together”. Next to regular football sessions a team of around 20 volunteers and 150 youths are having theater classes, cooking lessons, german courses and counseling. During the FARE Action Week the club started a series of workshops, the first one called FairPlayTogetherNow, with a focus on education and training tools. In this one-day-event experts of Amandla and the fairplay Initiative worked together with coaches and players of PlayTogetherNow on methods of inclusion, fairplay and respect in Football.

Seminar at College of Education Baden

The fairplay initative held its first seminar on 16. October with students of the College of Education in Baden (Lower Austria) on "Intercultural Skills Development in Sport". Two trained workshop facilitators, who also took part in the Training Session of Sport Welcomes Refugee Project in Rome (June 2017), will continue to work with this group also after the Action Weeks.

The footballclub „Kicken ohne Grenzen“ (Kicking without borders) held a match between their girls football team and the team of the social initiative LOGIN during the Action Weeks. After the game the girls came together for dinner and party. On the weekend 27-28 October the club held a fairplay workshop in the frame of their new build “Skills Academy”.

JFC Football Club and a refugee home in Lichtenberg/Berlin

The aim of the football tournament for refugee girls was to raise interest of young refugee girls in sport in general and specifically in football and to create a secure and creative space and format for discovering football. The football event was held as a “FUNiño” tournament.
FUNiño is a football game considering the needs of all players and tries to include all in the game. The activity consisted in warming up exercises for the whole group in the beginning, ball games and football playing in small teams based on fair-play rules with several goals placed on the field at the same time. The event was organised by the head of a refugee home in cooperation with the JFC Football Club Lichtenberg.

Women can join too!

The round table discussions on 20.10.2018 gathered participants from Helsinki, Hämeenlinna, Jyväskylä and Tervakoski. The discussion was about migrant women in sports.
Nana from Heritage Hämeenlinna has expressed the difficulties of girls to participate in the local sports clubs due to high pricing. She also asked the group to help their organisation to find indoor places to practice sport during the long winter period. She stressed the fact that indoor rooms are rare and expensive for their leisure group to organise activities on weekly bases.
Liikkukaa proposed with the board of Hämeenlinna Football Club and the sport section of Hämeenlinna city to discuss about place problems. After the meeting, Liikkukaa have organised a mini football tournament.
On the 27.10.2018 Helsinki International Sports has also organised a football game in Tervakoski. It brought together players from Tervakoski Pato, Heritage Hämeenlinna and Helsinki International Sports. The game took place under a cold snowy day. It was dedicated to friendship and fair play. It ended with a sauna party where the players use that opportunity to know each other and discussed the migrant situation in Finland and how young boys can integrate main stream club with lower monthly fees.

The activity started on Friday 19th of October as a taster night for the Adult Futsal programme. The taster night aimed to build interest with more players for the 6 week long Adult Futsal league tournament which was scheduled to start in November 9th -December 14th 2018. Another Group that took part in this activity was the Limerick Institute of Technology soccer B Team, Des Tomlinson from the FAI happened to be the coach of the B Team so he asked them to support FARE week which they gladly agreed to hold the Sports Welcomes Refugees banner.
The match was against Carlow Limerick Institute of Technology. So both teams took picture with Sports Welcomes Refugees banner before kickoff. It was organised by Chinazo John Nnaya, a 4th year student of Limerick Institute of Technology. Studying Sports Coaching and Development with Sports business managements (former asylum seeker) in collaboration with West Limerick Resources, Newcastle West, Co. Limerick.

The Associazione Culturale Triade Factory, in collaboration with the RFC Lions Ska Caserta, organised for October 20, 2018 a day of sport, music and aggregation to celebrate the seven years of activity of the RFC Lions, a multiethnic and anti-racist sports project active in Caserta and in his province. The whole day and all the initiatives were part of the "Action Weeks 2018" of the FARE network.
On the afternoon of October 20, 2018 a triangular basketball tournament was staged at the "Acconcia" sports center in Recale (CE) with the RFC Lions Ska Basket, Stella del Sud and Atletico PKH, all involved in the provincial amateur league of the UISP Caserta. Also, at the same sports center, there was a football match between the RFC Lions and a team of friends, supporters, and former players of the same anti-racist team. The day continued at the Casa del Popolo "Spartaco" of S. Maria C.V, where there was an anti-racist party involving about 100 people, with a 7-year buffet and cake, music, presentation of the RFC Lions Ska football and basketball teams and of the sports uniforms of the 2018/2019 football season.

On the 21st of October, Uisp local committee of Matera organised in Matera (Basilicata region) a sport event concerning football and inclusion in the frame of Sport Welcomes Refugees project, in which Uisp Nazionale is partner.
The tournament has been included in the pan-European campaign “Football People Action Weeks” and took place last Sunday from 10 a.m. to 1 p.m. In the Sport Village Matera, 4 teams were organised in order to compose 2 tournaments. The matches lasted 15 minutes each and they were played with the methodology of self-arbitration, that should reduce and even avoid any fight during the game. Semi-finals and finals were played through penalties, in order to reduce the competition and increase fun and sport values. 70 people participated at the matches. 25 of them were Matera’s students, while the others came from several SPRAR (Protection System for Asylum Seekers and Refugees) centres of Taranto (Puglia region) and Matera. Students and refugees share thoughts about this experience which everyone found exciting and useful to create a real inclusion. Fun and respect were at the base of this sport day.