It has been more than a year since we started our support for the SOS Balkanroute. SOS Balkanroute is an NGO dedicated to help and improve the life situation of refugees in South Eastern Europe, especially in Bosnia and Herzegovina. 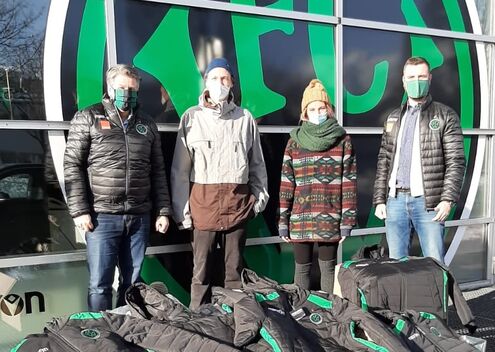 Latest in December 2019, Europe got aware of the catastrophic conditions for refugees when pictures and videos of the Camp Vucijak near Bihac in the Northeast of Bosnia were spread, where migrants stayed in tents without heating, clean water and warm clothes in the middle of the winter.

In the meantime, 18 transports of donations were organised from Austria to Bosnia by SOS Balkanroute with the help of several other NGOs, groups and individuals. Tons of food, clothes and supplies were brought in the country by the organisers of SOS Balkanroute.

SOS Balkanroute with its founder Petar Rosandic therefore received the Ute Bock award for humanitarian work in Austria in 2020. Recently the coordination of the initiatives is done in cooperation with the Red Cross in Bosnia and Herzegovina, and together they have the aim to improve the life conditions of refugees in and around the cities of Bihac, Tuza, Velika Kladuša, Sarajevo and Cazin.

After a lot of artists, musicians, and politicians slowly also the football starts to be more involved in the support. The fairplay Initiative tries to support the situation of refugees within their projects Football Zajedno, Sport Together and the SPIN Network.

But also Austrian football clubs and fans are getting aware of the terrible situation and start to active support. Fans of Wiener-Sport-Club and First Vienna Football Club already joined the donation campaign last year, the Freund_Innen der Friedhofstribüne again collected clothes, sleeping bags and jackets in the Flag, their legendary fan house. For the first time with FC Wacker Innsbruck a club of the first league in Austria joined the SOS Balkanroute. The club and its fans, who are known for their social actions over decades, together with the local NGO Mantagu Bed & Beers made a great contribution to the last transport of donations to Bosnia this January.

We hope that a lot of Football and sport clubs and players will follow this example in the future. In Bosnia itself there is no big hope that the situation of refugees can improve soon. They are treated like a 'hot potato' and the public institutions do not find a solution to handle the tense situation. Media are doing the rest to create a negative picture of refugees to the public. As a consequence, the conditions are still a catastrophe in most of the camps.

Although we cannot do enough to improve the local situation it is crucial for us to be a part of this humanitarian initiative, which in the coming period will still need all possible support to help refugees.