The annual pan-European FARE Action Weeks aims to boost public awareness of the problems of racism and exclusion, to create a unified front in dealing with this malign influence and celebrate the diversity of cultures in football. 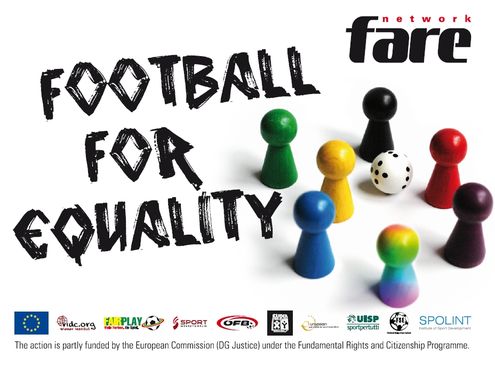 The 12th edition of the FARE Action Weeks will run under the theme "we are all football people" from 12 to 25 October 2011 and is backed by UEFA who will also send out a powerful message for equality ahead of all Champions League and Europa League matches. Also the six European partners of the “Football for Equality” project will join the fight against discrimination in and through football as an integral part of the EU funded project.

This seasons FARE Action Week will again see hundreds of sport and grass-roots initiatives in a concerted effort across 40 UEFA member countries which are run overwhelmingly by volunteers. It provides football fans, ethnic minority and migrant groups including refugees, local amateur football teams and human right NGOs across the continent a unique opportunity to come together to celebrate the integrative and multicultural power of the game.

To highlight the fight against racism and homophobia the ‘Football for Equality’ project produced campaign materials for initiatives such as t-shirts, warm-up bibs, flags and stickers which are currently distributed through the project partner organisations. In co-operation with grass-roots initiatives further activities and the production of materials for their events will be supported.

Several national leagues will participate. This week-end (14-16 October) all Austrian Bundesliga and First Division team will be part of the campaign Switch on your brain – burst prejudices”, which challenges stereotypes. Before kick-off all team captains will speak out against racism, homophobia and sexism by using a microphone. Also banners will presented and poster, balloon and stickers distributed to the fans.

Furthermore, in Austria banners and t-shirts will be used by amateur football clubs at their matches. A fan collective of second league club First Vienna FC is producing a fanzine featuring racism, homophobia and other forms of discrimination in football.

The project “Football for Equality - Tackling Homophobia and Racism with a Focus on Central and Eastern Europe” is led by FairPlay-VIDC in Austria. The other project partner organisations are Unione Italiana Sport per Tutti (UISP), the European Gay and Lesbian Sports Federation (EGLSF), the network Football Supporters Europe (FSE), the Institute for Sports Development - Spolint from Slovenia and the Slovak FARE partner Ludia Proti Rasizmu. The project is co-funded by the European Commission (DG Justice) under the Fundamental Rights and Citizenship Programme.