European Conference in Vienna to look at Social Inclusion in Sport 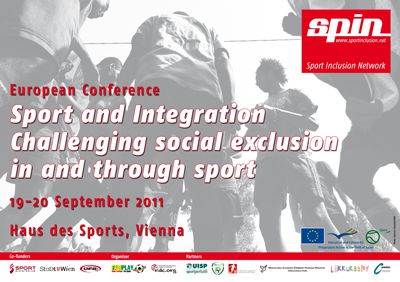 Partners of the European Union funded Sport Inclusion Network - SPIN initiative will host a conference to highlight the issues facing ethnic minorities and migrants in sport in less than two weeks.

The conference, ‘Sport and Integration: Challenging social exclusion in and through sport’, to be held in Vienna on 19-20 September 2011, will attract representatives from 21 European countries. It will bring together NGO's, football associations, sport bodies, migrant organisations, fans, players’ unions and European governing bodies including the European Commission, UEFA, FIFPro, Council of Europe, the Fundamental Rights Agency and ENGSO.

The gathering is the first pan-European event on sport and social inclusion since the Lisbon Treaty entered into force in December 2009, giving the EU a competence on sport.

Key issues to be discussed include the involvement of migrants and ethnic minorities in mainstream sport institutions and at issues of overcoming exclusion and discrimination in and through sport. Ongoing work to support the inclusion of minorities in sport will also be highlighted.

„We have witnessed progress over the last decade. The face of many sports has changed, not only football. The representation of diversity and inclusion is visible in the line-ups of teams. Many of the world’s finest athletes and players are migrants or ethnic minorities.

On the other hand migrants and minorities across Europe are still under-represented in non-playing positions and they are faced with an exclusion from positions of authority. Some sports still perceive themselves as ‘not affected’ by racism and the exclusion of migrants.

We hope the conference will provide a platform to highlight good practices among grassroots groups, sport organisations and governing bodies in Europe.”

The themes explored during the three parallel workshops will be:

background information on the conference

The conference is free to attend but places are limited, therefore quick registration is required.