More than 100 delegates from 76 different organisations representing 22 different countries came together in Vienna to discuss the widespearead exclusion of migrants and ethnic minorities in European sport institutions. 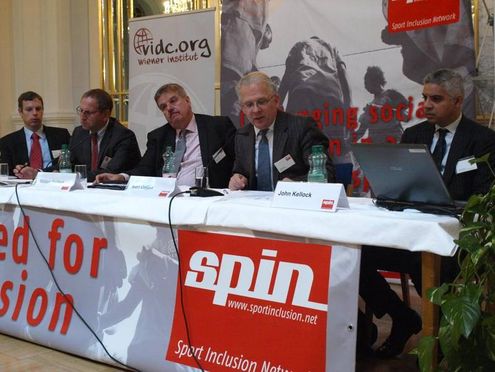 “Women and ethnic minorities can not make it to the next level. They hit the hard glass ceiling. We live in an ’old boys club’, who shares the same life-style, which leaves no place for minorites. At the congress in Paris UEFA made the decision to co-opt a woman into the executive committee. This first step would have been impossible without pressure from outside.
Democracy is not a fair system for minorites or even majorites as in the case of women. Therefore president Platini has advocated for posivitve discrimination. We badly need new input otherwise we dry up and remain in the 19th century. Keep up the pressure on sport!”

The Austrian Member of the European Parliament, Ulrike Lunacek, addressed the participants via a

“We know there is a fundamental problem in sports, its structural discrimination. Weather you are a migrant or a member of an ethnic or sexual minority or even if you are a women.
The objective of this conference now is to come up with strategies and recommendations how to tackle the glass-ceiling problematic in sport institutions. It’s a challenge that the best players are often ethnic minorites but they are not equally represented in nonplaying postions, in structures where decisions are made.”

Bart Ooijen of the sport unit of the European Commmission highlighted the social inclusion of migrants and vulnerable groups through EU sport actions following the Lisbon treaty of 2009 which is giving the EU a formal competence on sport:

First it is about increased participation. For instance that migrant women are not isolated at home, but active in parks, playgrounds and events. Also that sport takes account of culture and religion, such as Ramadan. Leadership positions are crucial; we need migrants as members in boards and committees. Mainstream sport organisations also need to improve coach education to make real integration possible”.

Cracking the Glass ceiling from above and below

Following the morning session three working groups explored the following themes: The role of clubs, associations and public bodies in cracking the glass ceiling for ethnic minorities, innovative approaches, tools and campaigns against exclusion and discrimination in sport and self-organisation & empowerment of migrant groups in sport.

The panel discussions over the one and a half day conference also involved former professional football players including Ex-Austrian International Gilbert Prilasnig, currently youth coach at his former club SK Strum Graz, former Hibernian FC midfielder Tony Higgins, now board member of FIFPro, Ex-Fulham FC captain Simon Morgan who is now the Head of Community Development at Premier League and Vladimir Sendrei, an ex-player of MSK Rimavska Sobota and Roma activist. The latter established recently his own NGO in Eastern Slovakia to convince Roma parents to send their children to the local football clubs and not wait for the state to provide money.

The SPIN project is one of five social inclusions projects funded by Sport Unit of the European Commission. The partners of SPIN include the Italian Sport for all Association UISP, the Football Association of Ireland, the migrant-led Mahatma Gandhi Human Rights Organisation from Hungary, Camino from Germany, the Finnish Liikkukaa, the Portuguese Players Union and FairPlay-VIDC as the lead organsiation.

In addition to the European Union the conference was supported by the the City of Vienna, the Ministry of Sport and the Austrian Football Association.

On 12th January 2012, one day before the opening of the first Winter Youth Olympic Games, a SPIN seminar in Innsbruck will adress for the first time the involvement of young immigrants in winter sports.